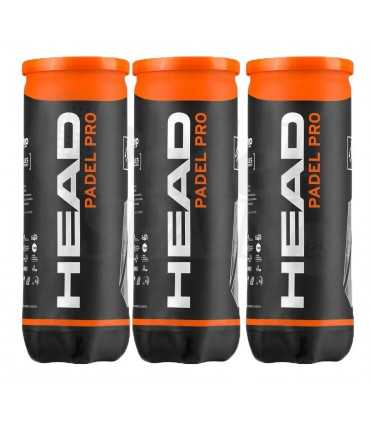 FEBRUARY 3RD, 2017I
am very pleased to announce that HEAD has renewed in recent weeks its agreements with the padel federations with which the contract expired. We highlight the renewal with the Spanish Federation where all organized championships are played with the official ball HEAD. The championships consist of the junior circuit and the senior and veteran competitions, both in pairs and teams.

In addition, and among the territorial federations HEAD has renewed the Aragonese, Principality of Asturias, Balearic, Canary, Catalan, Valencian Community and Basque. And as if this were not enough, the Navarre Federation has renewed its agreement with HEAD.

All this series of renovations coincides with the launch of the new packaging of the official ball, the HEAD PADEL PRO. Let's remember that the Head Padel Pro is the ball used in the professional circuit World Padel Tour, a model chosen by the players themselves. It is a Premium model of great control and long duration for the most demanding padel players.

"After four years of success of the HEAD PADEL PRO we have renewed the packaging to make it more modern and attractive to the consumer. And the launch of the new tube is accompanied by the renewal of the federations, entities that help us to promote padel and make it grow so that more and more users practice this sport. We have a lot to thank all the federations that trust us", says Ricardo Fernández Brigolle, Category Manager of Racquet Sports at HEAD Spain.

The Head Padel Pro is undoubtedly the most famous ball of the professional circuit World Padel Tour, a model also chosen by the players themselves. And it is not only trusted by the circuit but also by the Spanish Padel Federation, the Portuguese Federation and 12 regional federations

It is a premium model of great control and long duration for the most demanding padel players. Try it and see for yourself!

Premium ball for the most demanding padel players with great control and lively that will delight the high level player allowing him to make all kinds of plays.

This pack contains 3 cans of 3 units each.

Click for more products.
No produts were found.
Search
Top